Market-leading Velocity have the solution to the pothole menace 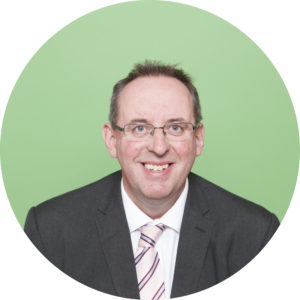 The original pioneers in velocity patching are once again forging ahead of the opposition, alone in achieving full industry codes of practice. Could Velocity be the solution to Britain’s pothole backlog?

The Local Government Association says some 2.2 million were filled in last year – but not before they had done £3 billion worth of damage to the nation’s cars, according to the Automobile Association.

The Government claims it is doing its bit to plug the gaps, with Transport Minister Norman Baker pledging £3 billion to councils for road maintenance between 2011 and 2015.

But the Asphalt Industry Alliance recently reported that it will take 11 years and £10 billion to clear up Britain’s existing pothole problem – and that figure stretches to 17 years in Wales.

Local authorities rightly point to shrinking budgets, with the parliamentary Public Accounts Committee calculating that councils have been asked to cut a collective £223 million from this year’s roads maintenance budget.

The jarring combination of an increasing number of potholes brought on by harsh winters and a decreasing repairs fund resulting from nationwide cut-backs has left many councils seemingly stuck between a rock and a hard place.

Despite authorities filling in potholes galore, the backlog is growing. But road repair specialists Velocity believe they have the answer to the problem. In fact, you might stay they have the hole solution!

Manned by a highly-skilled operator and driver, Velocity’s fully self-contained vehicles can tackle a problem that blights road-users throughout the country far quicker than conventional road repair methods – and at a fraction of the cost.

As the industry’s only operator adhering to the National Highway Sector Scheme’s code of practice for velocity patching, the Sunderland-based market leaders are confident their speedy and long-lasting alternative to traditional road repairs could dramatically reduce the waiting time if more local councils follow the lead of Kent, Hertfordshire, Northumberland, Stirling and many other forward-thinking highways authorities that use Velocity’s expert road repair services.

Velocity’s machines can permanently repair a pothole in about two minutes – a fraction of the time it usually takes a conventional repair gang to do the job manually.

And the use of high-speed patching techniques means the vehicles are capable of carrying out up to 150 long-lasting pothole repairs each day. Northumberland County Council was able to repair between 750 and 800 per week last year.

It’s a winning combination that has already attracted business from local authorities throughout England, Scotland and Wales.

Kent County Council is another satisfied customer. Highway District Manager Steve Rivers said: “Our Highways team has been using Velocity’s high pressure patching process across the county for a number of years. Over this time, a greater understanding of the process and its benefits has allowed it to be targeted to work effectively, to provide long term and durable repairs to the rural road network. This type of repair can be carried out quickly, reducing disruption to traffic and I believe it is a valuable addition to our toolkit.”

Stirling Council Team Leader Stephen Todd added: “Stirling Council has benefited from using the Velocity repair process for more than seven years now. It has proved to be the most efficient way to deal with potholes on our road network.

“Prior to using Velocity, Stirling Council had tried various other methods of dealing with potholes. We have found that by using a Velocity machine we have reduced the cost of each repair, while also being able to get a greater output compared to any traditional method.”

According to the AIA, the average pothole repair ranges from £35 in Wales to £55 in England, with around £90m spent on pothole work last year. But Velocity’s UK Sales Manager Phill Lewis says an average Velocity repair will cost around £18.

Mr Lewis said: “The 2010 winter of freeze-thaw-freeze left the UK’s roads riddled with potholes, with estimates of 1.6 million nationally. This winter wasn’t as bad but the tell-tale signs are there again. Without preventative maintenance budgets as a result of the national cut-backs, it’s understandable that local authorities are struggling to catch up with the backlog.

“Velocity’s machines can carry out fast and efficient repairs, which mean shorter road closures and improved public perception. They also tick the right box when it comes to sustainability and the challenge of reducing the highways’ carbon footprint. As we don’t need to cut out repairs, there is less waste and fewer trips to landfill, while the process is 100% cold applied.

“Given that our vehicles can make such dramatically improved repairs compared to conventional methods, we could make major inroads into the pothole backlog if more highways authorities followed the lead of those already working with us.

“Many authorities use a repair gang to fill in the potholes, but our machines can carry out a better, longer-lasting repair in a fraction of the time for a fraction of the cost. I would advise those who haven’t tried our process to contact us. We would be delighted to show them first hand its many benefits and cost effectiveness.” 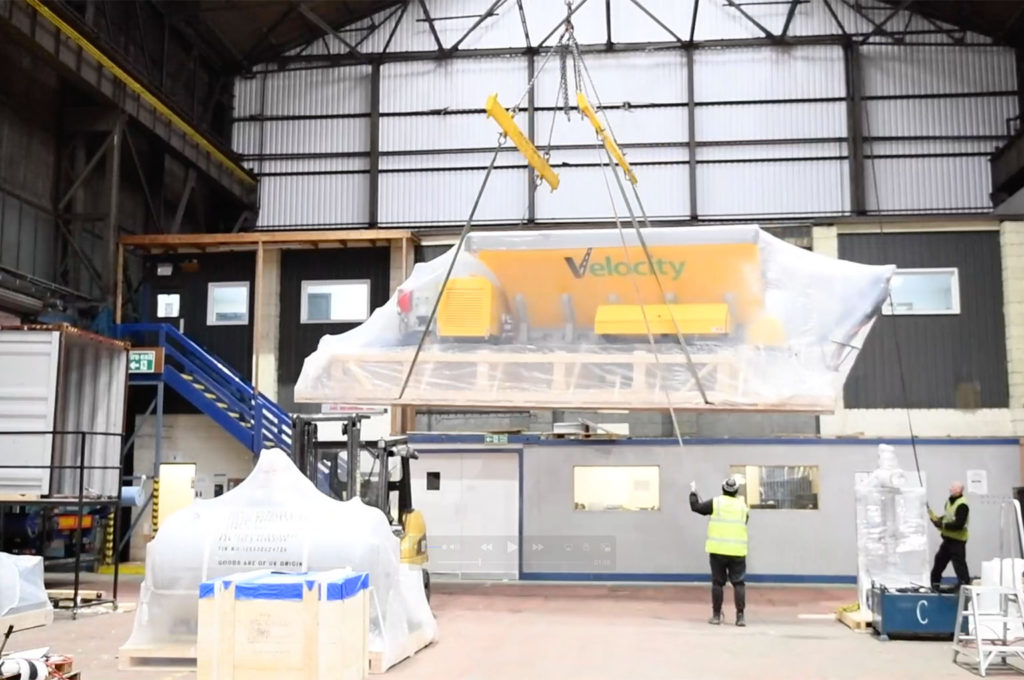 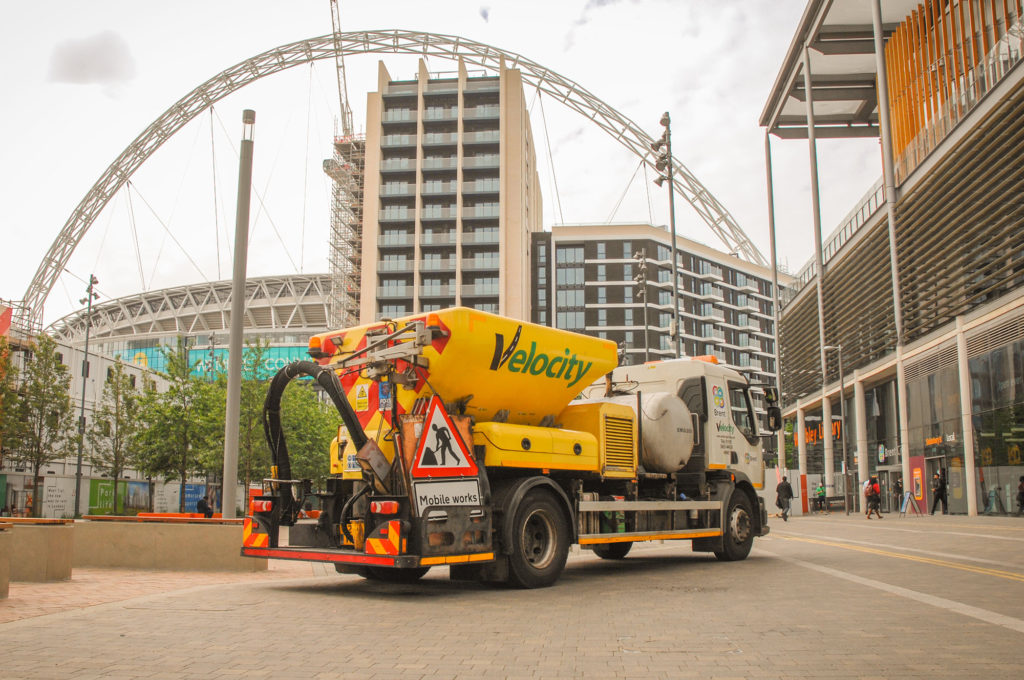 Velocity blast through potholes in Brent with intensive two-year programme 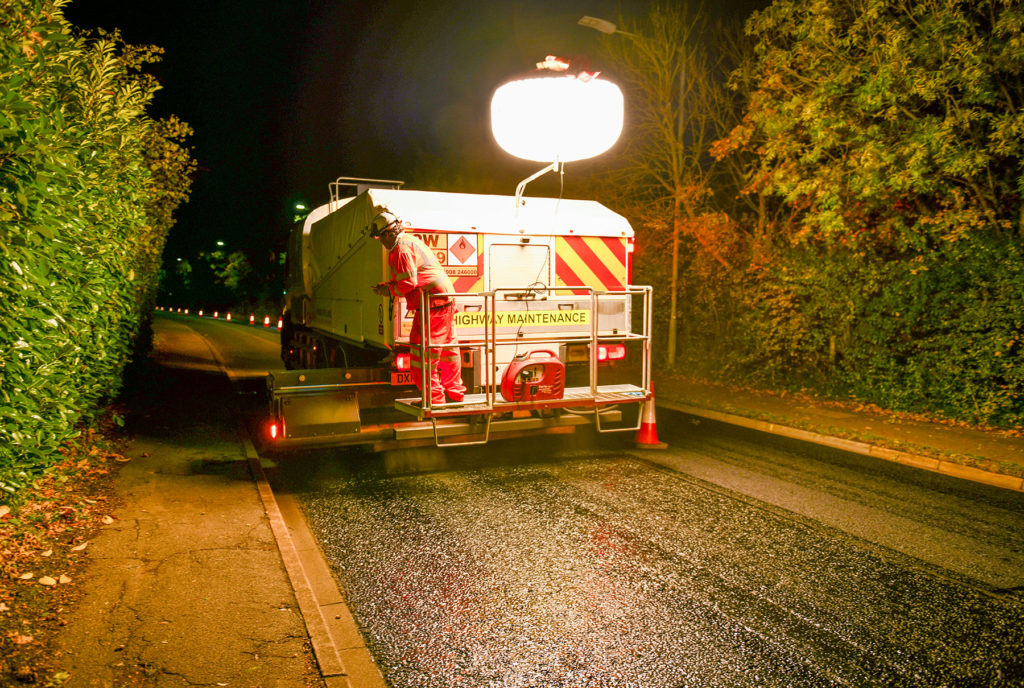 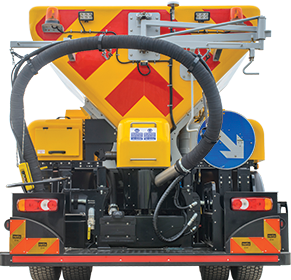 About Velocity
Twenty years ago, Velocity transformed the traditional approach to highways maintenance with the development and introduction of spray injection patching.

Today, Velocity repair over half-a-million potholes and other defects per year in the UK.

Designed and manufactured in the UK, the innovative technology is exported globally. 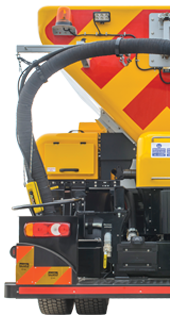